After temporarily closing their doors in line with the new Government guidance around COVID-19, Powerleague was looking for a swift solution that would ensure the safety of their customers, in preparation for reopening their football pitches.

The Football Association released specific requirements for gathering customer data as part of a track and trace policy, which Powerleague would need to implement. We were approached to create a user-friendly, business-critical tracking system, which is exactly what we did. 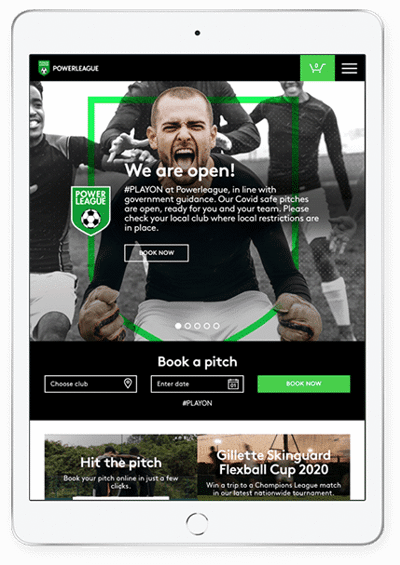 New Government guidelines were introduced, meaning that all users of Powerleague's facilities needed to be accounted for and contactable in the future. We were tasked with creating a Track and Trace system that would:

Working with Powerleague's existing back-office systems and website, our developers created a push-email system, sending a registration to the proposed captain of each team. The captain then has the option to either fill in the contact details for each person that will be attending or send a separate link to each player for them to complete themselves. This also applies to any referees, substitutes, and spectators.

Capturing a telephone number is essential, which is followed by the attendee's full name and preferred email address.

In line with GDPR, this enables Powerleague to keep accurate records of anyone that has used their facilities and make contact with them if there are any reports of Covid-19 from any of their sites.

Sitting on an Amazon Web Services system, the internal booking interface shows staff how many people have registered their details versus those that are attending. They can then send an email reminder for anyone that is yet to complete the form. A simple yet effective way to ensure all users are compliant with the new measures.

“In line with GDPR we're able to securely collate and store our user's details, allowing for fast-action if contact needs to be made. Our customer's safety is our top-priority, and the robust system that we now have enables Powerleague to conform to the relevant guidelines, whilst letting the game go on.”

Touran Weda - Head of IT, Powerleague

Vigorous testing was carried out on the project. Starting with a manual testing process our in-house test team worked with our developers to understand Powerleague's requirements, and then played the roles of end-to-end users, ensuring that all features were working as expected. This covered everything from the functionalities of Powerleague's back office to a customer making a booking. After any relevant changes were made, the team went on to use regression testing.

Regression testing allows us to ensure that any changes which have been made, have not adversely impacted any other aspects of the Track and Trace system.

With the team's expertise, they were able to conduct a full regression test, ensuring the system was still performing and reacting as planned. This can then be repeated for any future changes.